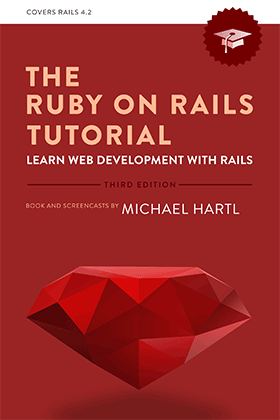 STAY UP TO DATE!

Joining the email list for this book will allow the author to contact you to let you know about special offers and when updates for the book are available. 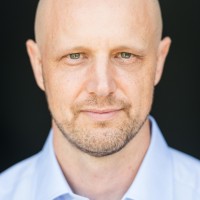 Michael Hartl is the creator of the Ruby on Rails Tutorial, one of the leading introductions to web development, and is a cofounder of the Softcover self-publishing platform. His prior experience includes writing and developing RailsSpace, an extremely obsolete Rails tutorial book, and developing Insoshi, a once-popular and now-obsolete social networking platform in Ruby on Rails. In 2011, Michael received a Ruby Hero Award for his contributions to the Ruby community. He is a graduate of Harvard College, has a Ph.D. in Physics from Caltech, and is an alumnus of the Y Combinator entrepreneur program.

The Ruby on Rails Tutorial helps you learn Rails by example through the development of a substantial sample application, including a site layout, a user data model, a full registration and authentication system, user-micropost associations, social “following”, and a feed of status updates. The Ruby on Rails Tutorial also teaches good software development practices, including version control with Git and GitHub, test-driven development (TDD) and integration testing, and instant deployment with Heroku. Though of necessity the book and screencasts focus on a specific sample application, the emphasis throughout the Rails Tutorial is on general principles, so you will have a solid foundation no matter what kind of web application you want to build.

New in the current edition

Translations of the Ruby on Rails Tutorial are available in several languages:

Web development is a tricky business, and despite the best efforts of the tutorial it’s likely that you’ll run into trouble at some point. If you do, I suggest comparing your code to the reference implementation of the sample app to track down any discrepancies. You can also post your question at Stack Overflow using the tag railstutorial.org. (Click here to see questions labeled with that tag.) The creators of the Learn_Rails subreddit have graciously offered to answer questions as well.

Errors in the tutorial can be reported by email, but please triple-check by comparing with the reference implementation of the sample app first.

While it’s impossible to anticipate every potential problem, here are some debugging tips that might help:

If your problem is of a general nature, such as having issues installing Rails or configuring your system, I suggest posting to Stack Overflow (again using the tag railstutorial.org), sending a message to the Ruby on Rails Talk mailing list, or posting to the Learn_Rails subreddit. This will allow other people running into your issue (and not just those following the Rails Tutorial) to benefit from the discussion. You can also try asking your question on the Rails IRC channel (#rubyonrails) to get live assistance from other Rails programmers. For issues deploying to Heroku, please contact Heroku technical support.

When asking your question on any mailing list or forum, be sure to include as much relevant information as possible. To maximize your chances of a helpful reply, I especially recommend the article How To Ask Questions The Smart Way by Eric Raymond.

I can be reached by email at admin at railstutorial dot org.

You will be emailed a link to download the book files.